PBR is used to handling hard headed situations and if those in the nations capitol think they will protest and use this as an opportunity to shut down rodeo / bull riding because of so called abuse - they have another thing coming.

“Whether you’re on the left or the right, there’s one thing everyone can agree on, and we address it with tongue firmly planted in cheek,” said Sean Gleason, CEO, PBR. “Our campaign is breaking through in a busy, cluttered market to announce PBR is in town. The tone is honest, fun, and a little bit rebellious, which matches our brand.”

With the culture as it currently is in our nation's capitol, it will be interesting to see how the citizens there accept the "toughest sport on dirt" in their town. Controversy seems to be the dish served each day and they will not spare the PBR even one meal.

To keep up with the action and fall out from the event go to www.pbr.com 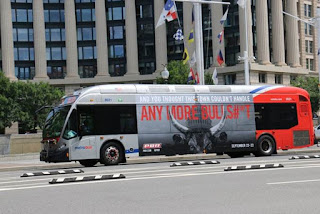