Brazilian photographer stands out in the arenas of the United States

arenas of the United States registering great names of the bulls in championships valid for PBR (Professional Bull Riders), main organizer of tournaments of this modality, and other rodeos.

Today, André Silva is considered one of the main photographers of this segment. In all, there are 17 years dedicated to recording great moments of this sport, 12 of them in arenas all over Brazil as well.

"I can not measure how many miles I've been up to now and how many clicks I've made. But I was present at several important moments in arenas such as Barretos, Americana, Jaguariúna, São José do Rio Preto, and in arenas of events in Minas Gerais, Paraná, Mato Grosso, Mato Grosso do Sul and Goiás" he comments.

He is currently the official photographer for the PBR Real Time Pain Relief Velocity Tour, one of the championships promoted by PBR in the United States. "I've done several world finals too and I've been present in great moments of the sport, such as the world championships of the: Silvano Alves, J.B. Mauney and Guilherme Marchi, and even in the farewell of the idols Adriano Moraes and Justin McBride" 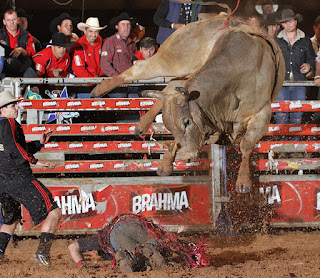 One of the many reasons he chose this line of work is his passion for photography and love for animals. "Over the years I've worked on different types of arenas and found situations where I had to think hard and improvise to get the best results possible."

That's why positioning within the arena is an important factor for a rodeo photographer. The unpredictability of an animal in the arena during its presentation makes the professional needs to be always attentive to everything.

"I had scare moments in arenas, with bulls coming towards me, for example. And even so, I did not miss a big jump, or a special moment for the sport. ", He says.

Another difficulty for the photographer is with regard to lighting. "Most events in Brazil are held in an outdoor arena, which means that many weather factors have often interfered during work. I photographed events during rainstorms, poor facilities and in arenas where lighting was near perfection.

The main information when referring to action photos is speed, as it directly affects the result of the image in this situation. "I currently work at a speed of 320 with external flashes, the least I recommend is 180. The speed used on the camera is directly connected to the radio and flash you're using, not just the camera."

Besides the technical knowledge of photography, another important part of your job is to get to know the animals and the athletes. "During all these years working as a professional, I learned that knowing how each animal presents itself is very advantageous, with what I prepare accordingly and anticipate a good photo."

During the 12 years that he worked for PBR Brasil, he practically knew all the animals and athletes. "With this information, I was already anticipating the exact moment and the correct "jump" to capture the image and the athlete's reaction after his mount. When working with flashes, it is not possible to make a sequence of photos, so I have to wait for the exact moment to register the image. "

André works with a Canon camera, PocketWizard radios and White Lighting flash (usually 4 or 6 flashes simultaneously). "Of course, depending on the environment and the situation, the settings may change, but the speed is normally set at 320, aperture 5 and ISO at maximum 500".

According to André, this is the ideal scenario within an arena. "Remember, for this particular sport, the focus should be on Al Servo and on a single point."

Some factors that help in capturing a good photo: positioning (inside or outside the arena) and installation of flashes in the arena, among others. "Think about installing flashes in the arena this way: it's basically putting together a" giant "studio. You want to make sure that both sides of the arena are the same. As for the positioning in the arena, I really like to shoot from a low angle to enjoy and capture the highest heels of the bulls," he adds.

André Luiz da Silva was born in the city of Sorocaba in 1981. Son of Ailton da Silva and Maria Clara Murcelli da Silva had a childhood similar to many middle-class boys, full of street football, roller carts, taco, etc.

At the age of twelve, he started playing basketball, becoming a professional athlete with fifteen, played for Atletico de Sorocaba in the amateur category and still played Serie A2 for Peruíbe. At the same time, he practiced swimming besides painting pictures. Still as teenager another passion was born: the computer. "I won a 286 computer with Hercules Monitor from my father, he had the green screen and work only in DOS environment. In 2003 he graduated in Computer Engineering in Brazil.

His story with the rodeo, of course, like so many others, began with the dream of being a pawn, but the fear would not let him continue and was discovering another talent, that of recording the moments through the lens. In 1996 his friendship with some competitors kept him close to training and rodeos. In 1999 in the rodeo of Barretos he risks a few photos of mount which would seal once and for all the arena in the life of André Silva. 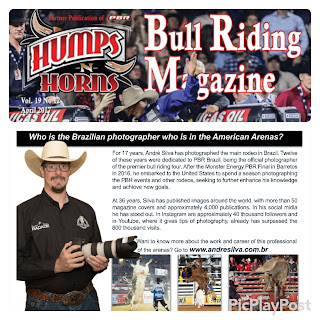